The MacBook Air 13" Late 2010 - Mid 2017 is an amazing laptop used by many for work or school. Its light-weight composition and fast features have earned it a great name in the market. If you own one of these systems, you may want to retain it for longer and not change it. Unfortunately, over time all laptops reduce in power and offer lesser charge.

The best option is to replace your battery and not your laptop! Here are the best MacBook Air 13" Late 2010 - Mid 2017 replacement battery options for you. Read below for detailed instructions on how to replace your laptop battery by yourself.

Your MacBook Air 13" Late 2010 - Mid 2017 will provide detailed data on what your battery’s health is at any given moment. Follow the below instructions to know-how - 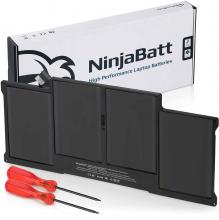 The NinjaBatt Battery A1466 A1496 A1369 for Apple MacBook Air 13 Inch 2010-2017 is premium quality and high-capacity one that is perfect to bring your system back to its original working power. Made using top grade battery cells and high-quality materials, it comes with all the required safety features. This Li-po battery is tested to meet OEM specifications with true charging capacity. They are also UL/CE-/FCC-/RoHS certified to ensure short-circuiting, overheating, and overload protection. Get up to 500 charging cycles along with a 12-month company warranty.

The RayHom Replacement Laptop Battery for Apple MacBook Air 13 inch is an OEM battery with 7200mAh/ 55Wh and 7.6V. It is a Li-Polymer battery that is tested under strict standards and made the same as the original one. It also offers low power consumption due to its IC design and upgraded chip. You will get up to 500 charge cycles with complete over-charging, over-discharging, and short circuit protection. This replacement battery for Apple MacBook Air 13 inch is certified for safety by UL/ CE/ FCC and RoHS. 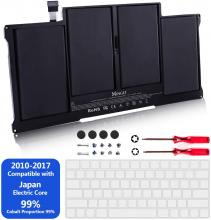 The XINGLT Replacement Laptop Battery for Apple MacBook Air 13 inch is an upgraded design with a Japan Electric Core and Cobalt Proportion of 99%. Higher Cobalt composition means better battery performance. It offers a capacity of 7200mAh/ 53.28Wh and 7.4V. Get up to 500 recharge cycles with this brand new premium quality battery that also provides fast charging and low power consumption. It has built-in circuit protection for safety and stability and is UL-/CE-/FCC-/RoHS certified. The package contains the battery as well as two screwdrivers for replacement, keyboard protective film, ten replacement screws, and four helper mats.

Step 1 -
Shutdown and unplug the MacBook Air. Make sure you are working on a soft static-free surface. Now, close your Macbook and flip it over.
Step 2 -
At the bottom, you will see ten 5-point Torx screws to remove using a Pentalobe screwdriver. The two center screws along the hinge edge are longer than the rest so remove those first.
Step 3 -
Lift the bottom cover off but there's a snap in the center so you will have to pull a bit to detach it.
Step 4 -
You will see the battery connector that has to be carefully detached and removed.
Step 5 -
Next, there are five screws holding the battery in place that need to be removed. Start with the three in the back and center that are longer and then move to the two shorter ones near the front.
Step 6 -
Now all you need to do is lift the battery out of its place and replace it with the new one. Make sure it is laying flat and perfectly in place. Carry out the steps in reverse order to put back your laptop and start using it again. 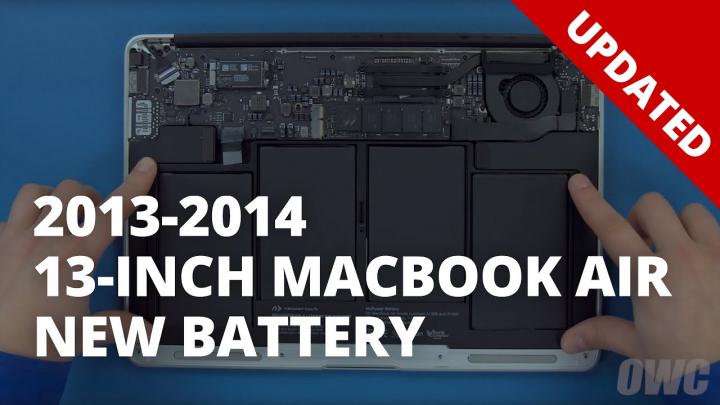