Make sure your MacBook Pro 15" Late 2008 - Early 2009 laptop works as good as new by replacing the old battery with a new one. This is one of the best ways to ensure you can elongate the life of your system and make sure it stays powerful. This will also help you reduce expenditure as replacing the battery is a much cheaper option than changing the whole laptop. Get more work done, listen to more music, and watch more videos with an extremely efficient MacBook Pro 15" Late 2008 - Early 2009 replacement battery!

The NewerTech NuPower Battery For MacBook Pro 15" Unibody Late 2008 & Early 2009 has been created perfectly to fit your laptop and offer complete compatibility. This replacement comes with OEM sleep and power reduction modes due to its upgraded battery power solutions.

Get longevity, high-performance, and supreme quality with this environmentally responsible battery upgrade. It is made under the RoHS certification and strict quality standards for safe usage. You also get a 1-year comprehensive warranty with each battery. 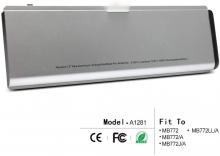 The LQM New Laptop Battery For Apple MacBook Pro 15” (2008 Version) is made specifically for the model numbers A1281 and A1286. This is a Li-Polymer battery with a capacity of 56 Wh and a 6-cell construction.

Get up to 500 recharge cycles when you replace your old battery with this one, which is 100% new and efficient. It comes with the required safety features as well as CE-/FCC certification. You will also get 12 months warranty.